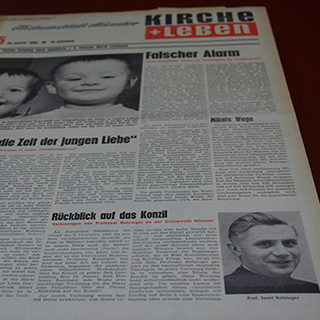 1968 meant a break for many Catholics, especially with regard to their religious faith and their attachment to the Church. But what was the relationship between the movement of 1968 and the very different forms of being Catholic? And above all: What role did Catholic theology play in this?

The focus of interest is not on internal theological discourses, but on the manifold communications between academic theology and the public inside the church on one hand and the general public on the other. How did academic theology answer questions about being Catholic after 1968? Did theology recognize and refer to the values and language of the so-called sixty-eighters? Did theology engage in new spaces of discourse or did it withdraw into the Catholic theological ghetto? And to what extent were the answers theology could give helpful in coping with the upheaval?

The project approaches these questions in two ways. On the one hand, it aims at reconstructing the development of the ecclesiologies of Joseph Ratzinger and Hans Küng after their experiences in 1968. The focus is on the reception of political concepts such as Democracy, People and Co-responsibility as well as on the perception and implementation of the conceptions of the church by clerics and lay people. On the other hand, the fundamental challenge of Catholic moral theology and ethical conduct due to the upheaval is explored. How can ethical norms be established in a pluralistic society? Are there specific Catholic norms? Or can ethical norms in principle only be founded autonomously on the basis of reason? The controversies were fierce. They were sparked off by Alfons Auerʼs concept of autonomous morality, which Bernhard Stoeckle of the school of “faith ethics” resolutely opposed, and were continued by Franz Böckle and others.

The thesis pursued by the project is that from 1968 onwards, theology became of decisive importance for the faithful, who sought answers to their questions not so much in the magisterium of the church but in academic conceptions. Theologians offered concepts of meaning, horizons of interpretation, possibilities of distinction and patterns of behaviour. Theological works such as Küngʼs “On Being a Christian” or Ratzingerʼs “Introduction to Christianity” became bestsellers and determined discussions far beyond Catholic circles. They were decisively responsible for the new formation of very different variants of being Catholic and for very differently shaped spaces of discourse. Theology began to determine life, and life to determine theology.