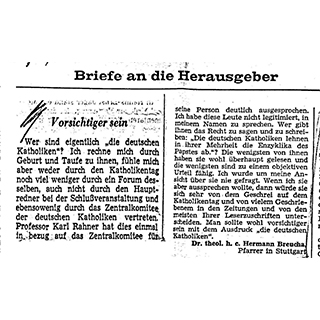 In the 1970s, the church parish was for most Catholics still a central location of ‘being Catholic.’ During that decade, it became a hotspot of the change that was occurring in the transition from the traditional milieu to a more diversified ‘being Catholic.’ The conflicts that emerged in the course of this process implied a non-identical conception of being Catholic; these are examined with a view to evolving pastoral practice, changing semantics, and a new emotional dynamic in a case study structured around individual biography.  The subject of the study is Stuttgart city pastor Hermann Breucha (1902-1972), who before Vatican II had sought to break down boundaries but who in the later 1960s became increasingly ‘conservative’ in thought and actions.

Sub-project 1 focuses on the ‘milieu manager’ in his ad intra function and, in addition to the traditional pastoral areas of action inside the church, examines two forums of priestly self-renewal:  the ‘Theological Working Community’ in Stuttgart and the attempt to establish a renewed pastoral theology of preaching through homiletics courses and the sermon journal Gedanken zur Sonntragspredigt (Thoughts on the Sunday Sermon).  Sub-project 2 focuses on the priest in his ad extra missionary function.  This includes Breucha’s activities with the ‘Una sancta’ ecumenical group, his work as a radio pastor with SDR, the ‘Religious Educational Work of Stuttgart’ (Religiöse Bildungsarbeit or RBA), as well his efforts on behalf of a dialogue between the Church and the fine arts and literature.