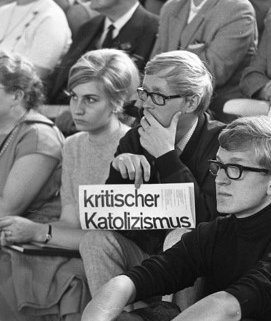 The encyclical Humanae vitae of 25 July 1968, which forbade Catholics the implementation of artificial birth control, gave way to enormous reactions both within the catholic world and beyond. For this, it must be regarded as a major event in modern church history. The decision of Pope Paul VI. to connect the legitimacy of marital sexuality with the possibility of pregnancy did arouse some euphoria, but mainly deep disappointment in clerics and laics of the Federal Republic. The project will investigate the reactions to Humanae Vitae during the 1970s by making use of emotional history and ritual theory approaches. Did Humanae Vitae help rising different “emotional communities” within West German Catholicism, which shape different groups and position until today? First, the project deals with rituals of protest, which were expressed through many letters to the bishops and demonstrations at the Katholikentag in Essen. Especially of interest seems to be the relationship between catholic protest to licensed birth control methods and more general political protests of 1968. Secondly, many reactions referred to the links and practices between confession and Holy Communion sacraments. Recent research seems to differ, whereas a spreading non- acceptance of the sacrament of confession took place since the early 1960s. Did the “emotional regime” (William Reddy) which priests exercised onto their flock lead to a fundamental crisis, and did the crisis nurture another boost of individualisation and pluralisation of the faith? Thirdly, the relationship between husband and wife and the everyday life of marriage comes into view. Catholic marriage guidance bureaus all over the Federal Republic still had to deal with the anxieties foremost of women who could not adjust to multiple pregnancies. The project relies on archival sources (correspondence of bishops and priests with laics, papers of the “Pfarrgemeinderäte”, faculty members, marriage guidance bureaus), catholic publications (diocesan newspapers) and questioning of contemporary witnesses.

The project will link the history of West German Catholicism and the search for specifically “catholic” dynamics of change on one hand with more general ideals of historical turning points during the 1970s on the other hand.