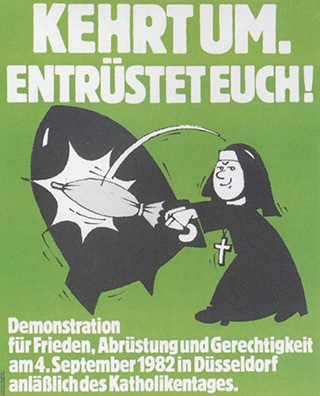 The history of Catholics in the context of the founding of the political party ‘Bündnis 90/the Greens’ has yet to be written.  That is a surprising discovery:  not only were two-thirds of the party’s first voters in 1980 (at least nominal) Catholics, but -- alongside considerable differences, for example in their views of the family or the sexes -- there were and still are important commonalities, such as in social policy and ecology.  Finally, some of the Green Party’s leading figures in past and present, including Petra Kelly, Joschka Fischer, and Winfried Kretschmann, underwent a Catholic socialization when growing up.

The main focus of this sub-project is on biographies of protagonists who experienced a Catholic socialization as well as on different phases of biographical trajectories.  It analyzes individually attributed processes of exchange and change in the spheres where religion, civil society, and politics overlap.  Three different biographical groups are studied: 1) actors and activities that peeled off from the positions of the Catholic mainstream in the context of their involvement with the Greens; 2) actors and standpoints of the Catholic hierarchy, the Central Committee of German Catholics, and representatives of the CDU and CSU -- the latter two groups sometimes contained the same people -- in their relation to the Greens; and 3) actors and their standpoints from the spheres of Catholic ‘progressive’ and ‘conservative’ youth organizations.  Methodologically, this biographical focus is embedded in structures, (regional) cultures and mentalities, networks, institutions, theologies, and narratives, some of which may still have influence today.