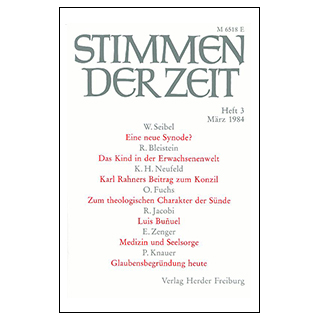 Between Vatican II and the Wende of 1989–1990, the theological discourse and view of society changed significantly in the sense of this research project.  The new culture of debate in the theological sub-disciplines and its conveyance into the public spheres of both church and society coincided with an increase of criticism and counter-criticism within the Catholic Church.  In the process, the experience of being Catholic also changed. The mental horizons and life paradigms of Catholics increasingly took for granted the religious pluralism of the Federal Republic.  As a result of the ‘education revolution’, the number of potential readers of theological works expanded.  Familiarity with these came to be expected of committed members of lay councils and became a precondition for structural change through participation.

This sub-project is the first to make large-scale use of the literary genre of book reviews and recommendations as the basis for a religious and cultural history analysis.

The project examines the textual landscape through a content analysis of media reviews and critiques, which will identify aspects for the closer investigation of author and reviewer networks.  Finally, the project will attempt to elucidate in which ways the theological currents are congruent with the phase model of social evolution.